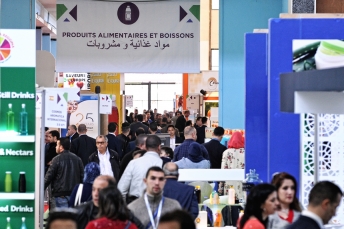 The Algerian industry is increasing developing thanks to public development programmes in the food industry sector.

These programmes enable the creation of national companies in the cereal, milk, water and beverage areas but also over the past few years, in sugar, oils and fats, conserves and meat.

Algeria's primary aim is to give value to local food processing and ensure that production continues to develop in sectors which up until now have been loss-making.

The development of the Algerian market and demand in the country remain buoyant due to demographic growth and greater purchasing power in the country.

While Algerian industry can yet be further improved and perfected - with considerable margin for improvement in the equipment and technology used - the country nevertheless has significant local production potential:

In the cereal industry:

Algeria is the world's largest consumer of cereals. The production of durum wheat covers between 60 and 70% of the needs of Algerian Industry. The Algerian cereal industry is highly focussed on the production of flour and semolina.

In the dairy products industry:

- A milk market estimated at 5 billion litres per year.

- Main products of the dairy industry:

In the private sector, major investments are devoted in addition to “ultra-fresh” segments, enabling Algerian consumption to grow.

In the Beverage Industry:

This industry is divided up between APAB (associations holding 85% of the market) and small operators.

In the Sugar Industry:

In the Fruit and Vegetable Industry:

- The future of the fruit and vegetable sector is in the hands of major producers. The “protection” of imports does not work in favour of small local producers.

- Despite the development of the fruit and vegetable sector, this industry is considerable need of new equipment, new technology transfer and knowledge transfer, and particularly training in Algeria.

And also in other sectors:

- Oils and other fats:

Algeria would mainly like to focus on production of olive oil.

This sector experienced high-growth of 11% in 2016, reaching €2.08 million euros in turnover. The range of prepared meals generating the most sales remains that of “ready-made salads”.

This sector brings together the production of vinegar (low alcohol content), red sauces (tomatoes, harissa), mayonnaises, stock cubes, sweet and savoury snacks, biscuits and crackers, etc. Since 2017, these productions have been governed by the signature of a protocol aiming to arrange agreements on sales, production and the creation of factories.

With regard to the production of coffee, chocolate and dried fruit and vegetables, this remains dependent on the import of raw materials into the country.

This industry is not mastered in all sectors. The Algerian government thus wishes to achieve improvements in several areas: the use of new efficient technology, the implementation of temperature tracking (transport), the hygiene of staff, premises and equipment, and product storage methods and organisation.