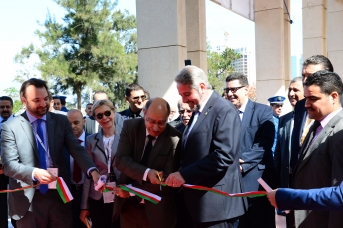 DJAZAGRO exhibition, not to be missed event for the actors of the agrifood sector will be held from 18th to 21th April 2016 at the SAFEX exhibition Park in Algiers, Algeria.
Take a look at the new image of the show, more modern and representative of the event professional footprint.

THE AGRI-FOOD SECTOR’S MAIN EVENT IS BACK FOR ITS 14TH EDITION IN 2016, WITH A MODERN TWIST!

DJAZAGRO, the unmissable show for players in the agri-food sector returns from 18th to 21st April 2016 at the SAFEX Exhibition Park in Algiers, Algeria. Come and discover our new and modern look!

Even bigger in 2016 The show will be spread across 4 halls allowing the catering sector to have a more prominent position, as it separates from the bakery section.

Growing demand In 2015, DJAZAGRO was once again the biggest agri-food show in Algeria, with 93% of visitors coming from the country. As a result of growing demand, the 2016 edition will strengthen its communications across the North Africa region, whilst opening up to Sub-Saharan Africa.

For our 14th edition, DJAZAGRO expects around 21,000 professional visitors and 700 exhibitors